Skip to main content
June 4, 2015
The following post has been certified by the International Association of Procrastination, so if you have Tripos/tests/work/homework to do, please.............
.....read on.

About a month ago, I was reading a post[Citation should go here] on Zhihu (Chinese version of Quora) on a thought experiment: The teletransporter experiment. The original blog post provided weird takes on the concept of "me", so I thought it would be relevant, interesting, and appropriate for me to put an altered version of this and my comments as my first blog post.  For people who know this story, please skip to the next split line.

What? You thought I am going to introduce myself and talk about my stories? Nope.

It is 2054, New York. Luckily World War 3 did not start yet and you still exist.  Every day you travel to London to work through the teletransporter machine. A scanner records all the information of your body, transmits it to the machine in your office in London, and rebuilds you using particles in London and the quantum information collected.
The original body in New York is destroyed in the process and only information is transmitted. 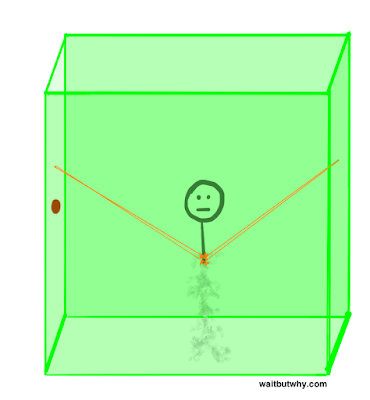 When you arrive at London, you feel exactly the same as you felt in New York: half awake, grumpy, and..."Why am I still in my pajamas?"

Note to Physicists: You are in the philosophy sector. Suspend your disbelief now. Like right Now.

1. One day you travel to London, but your body is not destroyed through the process. Thus you find out, horrified, that there is a "copy" of you going to work in London. Under Federal Regulation #897, the machine notified the government and you were captured by police to be destroyed. Horrified, you tell them that you are still here and they should destroy the copy of you in London.

Using common sense, (which is surprisingly uncommon), as your body is still in New York, according to the Body Theory, you are defined by what you are made of, so of course you are the New York you.

By Information Theory, you are defined by the information your brain contains, so both of you are you. Information theory sounds wrong in this scenario, but I promise all three theories are just as bad as each other.

Now this is turning to an Economics essay so I'll stop. (To economists: No offense. Really.)

2. Consider another malfunction of this machine. The data network of teleportation is corrupted and thus your mental data ended up in a hotel at Milan, with another person, A's, body. Now A's mental information is in your body in London. So when you turn around, A's friends greet you, but of course the following happens: 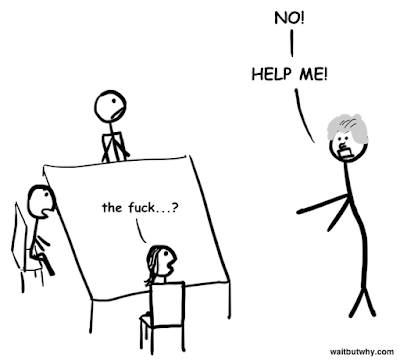 Similarly, The three theories tell us:

So under this scenario, both the body theory and the brain theory sounds pretty bad: you don't even have control over your body in London anymore and that body doesn't have any of your memories, so how can it be you?

Ok, so we "proved" that all three theories work about as well as physics in a black hole. So who are you?

Note: The following theory is completely made up for the purpose of this discussion, so please start your suspense of disbelief now.
The teleportation scenarios, in my opinion, has a huge underlying assumption: consciousness is continuous. When I step into the machine, it assumes that you feel that you have jumped from New York to London. Let's check what should actually happen:
Consciousness in New York: It ended.
Consciousness in London: It starts with the memory that you were in New York the last second. So it feels like you have jumped from New York to London.
So, if we define the consciousness theory as you are what your continuous consciousness belong to, then teleportation turns from a transportation device to a mass-murder weapon: every day you die and a replica of you is born in another place. Although this may sound weird, going through the tests above, the consciousness theory gives sensible answers to the question "who are you".
So did I single-handedly solve one of the three fundamental philosophical problems in a blog post? No. The problem with the consciousness theory is that in some sense it is a circular definition: I am defining you are as what you are.
OK, I think I will stop here. Need to solve my existential crisis first.
Please leave any comments/suggestions/rants below. Thanks!
For even more procrastination:
Link to Zhihu here and link to original English post here.
Login using Touchstone